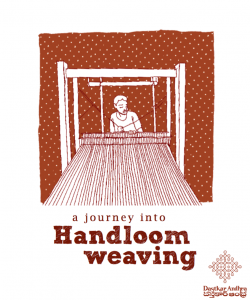 Dastkar Andhra’s initiated its activities in 1989, as an off shoot of Dastkar Delhi. In 1996 it was incorporated as a public charitable trust with the objectives of promoting artisan industries suited to ownership by the primary producers.
Their Objectives are:

Facilitating participation and equity within and demonstrating the viability of the handloom industry are the long term aims of Dastkar Andhra. Its engagement with weaver communities is based on these principles, insisting on the need for transparency in transactions at all levels and control of different aspects of the production process by the producers themselves.

Want to be the first to know about news & special offers! Sign up for our Newsletter. Subscribe